Bear Ridge Helped in the Sheppton Mine Disaster

The 6-inch borehole that reached two of three miners trapped more than 300 feet below the surface had already been widened to 12 inches. To hoist up a man. however. the opening would have to be nearly twice that size. The problem that confronted rescuers 35 years ago this August was there was no drill bit available large enough to widen the hole.

“I don’t know if they even made them that large” said Theodore “Ted” Kaliher of 620 S. Lehigh Ave., Frackville, then foreman or the machine shops at Bear Ridge.

The Sheppton minor collapse was in its second week. The lives of David Fellin, then 48 and Henry Throne, 28 depended on the hole being widened. State mining officials devised a plan using side extension drills from The Hughes Co. in Texas. The task of implementing the plan fell to Kaliher, now 67. Despite saturation news coverage worldwide of the Sheppton drama. the ballad or Kaliher’s role in the- operation has remained unsung. (The tragedy was back in the news last month when Throne, the last survivor, died May 17 at age 63.)

That bothered David A. Schmit, assistant real estate director in the county coal lands office Pottsville more than it did Kaliher. Schmit who formerly worked for J&B Ltd., a Jack Rich family company, provided the tip about Kaliher’s involvement in the 35-year-old rescue operation.

At the Bear Ridge shops, a division of the Rich Family’s Gilberton Coal Co., parts are made to fix the company’s coal-mining equipment: drills, trucks, dozers, loaders, breaker machinery and the like.

Until two-years ago, when it was moved to the John B. Rich Memorial Power Station, Morea Road. It was at Bear Ridge, just south of Turkey Run near the North Schuylkill Landfill Association’s transfer station.

Kaliher, now semi-retired, acts as a consultant at the new shop, but enjoys visiting the original site, walking through and around it to refresh memories of his 38 years on the job. Thin, agile and sporting a gray goatee-like beard, Kaliher opened up the doors to the old Bear Ridge shops last week, revealing an oily dampness and eerie silence that echoed visitor’s voices. 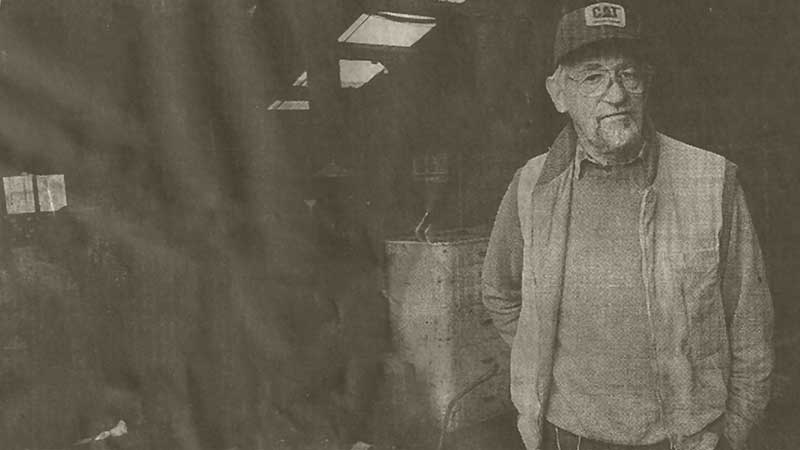 Theodore Kaliher talks about how the Bear Ridge Shops helped in the Sheppton mine disaster by retro-fitting a special drill bit brought in from Texas.

Pipes, drill extensions, axels and similar kinds of metal parts lay rusting around the outside and inside of the shops. With debris-covered desks and chairs, they formed an obstacle course inside from the building’s office entrance to the machine shop where Kaliher spent his heydays.

Massive iron and steel behemoths, unused lathes anchored the sides and front or the shop leaving the center and one end largely free of debris. An electric door opener worked the metal garage door at the open end . Kaliher raised it to reveal more rusting iron and steel outside.

Nearly three and a half decades ago, this place wasn’t so quiet. Bear Ridge and indeed all “Gilberton Coal employees were well aware o the Sheppton operation, Kaliher said.

John Bova, a brother of the third trapped Sheppton miner, Louis J. Bova, 42 – his body was· never recovered – worked at Bear Ridge as a welder.

Rich: Do All You Can

The late John B. Rich, who started the Rich family coal, mining enterprises now run by his grandson, John W. Rich, had sent out word that the company and workers should be ready to provide rescuers whatever assistance required, according to Kaliher.

He credited H.B. Charmbury, then the state mining secretary, and Deputy Secretary Gordon Smith – who later worked for Gilberton Coal – for conceptualizing drill-bit modifications for the final rescue.

The idea was to install four drill extensions on the side of a 4-foot-long shaft that held a 12-inch bit at the from tip. As the drill would re-enter the hole, the side extensions, affixed to the shaft about two feet or so above the drill, would ream the hole out to the required width. Kaliher said was given a sketch. And the drill extensions were flown from Texas to the Hazleton Airport via a Navy plane. “It was at night.” said Kaliher who met the cargo at the airport, “but I couldn’t tell you what time.”

As he was enroute, preliminary work on outfitting a 4-foot drill shaft had begun at Bear Ridge. “The shafts were pretty much standard and we had some around,” he said. “They didn’t have to dismantle the drill at the rescue site. At the airport, the cargo was loaded into Kaliher’s pickup and he set out immediately for Bear Ridge. There was no time to waste.

From Sketch to Reality

Kaliher had the sketch, but how to make it reality was up to him. A steel ring, to mount the side-drill extensions, would have to be attached to the drill shaft. To shape it, Kaliher manned the Le Blond.Co. lathe himself. With a crew of welders. Kaliher worked throughout the night. I guess it took six or seven hours to complete the job.” he said. There was no time to rest. Kaliher set out for the rescue site.

“I guess it still was an hour or so before light,” he said of his arrival at the mine. He wouldn’t see home for the next three days. Because he was schooled in hydraulics and familiar with repairing drills, he was asked to remain at the site throughout the actual operation.

To allow the drill to plunge more than 300 feet into the earth, hollow steel sections, each 32 feet, 9 inches long, were attached to the actual shaft containing the drill tip rotated by the mighty Bucyrus model 50-R drill owned by Pagnotti Enterprises. Ten such extensions were needed for the reaming, Kaliher said. A metal/wooden/rubber plug had to be inserted· into the hole, several feet above the trapped miners , before the drilling could begin, to ensure debris didn’t fall into the chamber.

It was an agonizing process. The drill could rotate 1,750 times per minute, but had to be run as slow as 15 rpms and proceed at a pace or only an inch or two an hour. Kaliher said this was for safety reasons and largely because rescuers learned that at fast rotations, the drill tended to elongate the hole, pounding the sides and causing rough edges. Slower rotations per minute kept the hole nice and straight, he said.

The drill and extension shafts were hollow. according to Kaliher. Air was forced down. spewing the pulverized rock. shale and slate to the surface, where men used hand shovels to scoop it out of the wav. “It was like sand,” he said. It took about three days to widen the hole, Kaliher said, but only about a day and a half of that was actual drilling. The drill itself required periodic servicing, and the work had to stop occasionally so that food or other items could be lowered to the trapped pair.

The hybrid drill shaft worked without a hitch. Kaliher was there when the reamer finally broke through to the trapped miners, and when they were ultimately hoisted to the surface shortly thereafter. Te feeling, he said matter-of-factly, was one of relief that the men had finally been rescued, and pride at having been a part of it.

Back to About Bear Ridge

Bear Ridge is certified under the Commonwealth of PA’s Small Business Contracting Program.

Employees are certified in stud welding and AWS D1.1 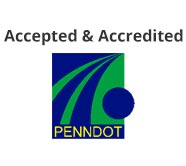 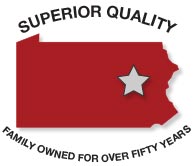